What a week’s it’s been! Going back to last Sunday where I ran the Pro Football Hall of Fame Half Marathon to this past Saturday when I ran the Indy Mini Half Marathon, it’s been quite a whirlwind! So much has happened and I learned a lot about myself and things I want to work on.

So let’s get started with the exciting stuff. I will write about the Hall of Fame Half a bit later, right now I want to tell you all about the Indy Mini while everything is still fresh in my mind. I’ve never stayed in Indianapolis before so everything was new. We stayed at a hotel right next to Lucas Oil Stadium so everything was within walking distance and we were near an easy to find landmark, so that was cool.

After settling in, my hubby and I did a little walking to familiarize ourselves with the area. While more industrial than Tulsa, where I ran this past November, Indianapolis was still clean and pretty with lots of pedestrian friendly areas and art to enjoy. Not to mention a huge 4 story mall and lots of great places to eat! 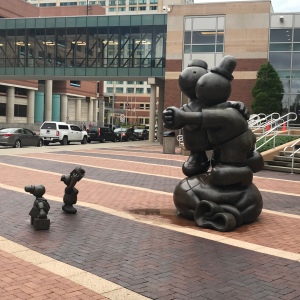 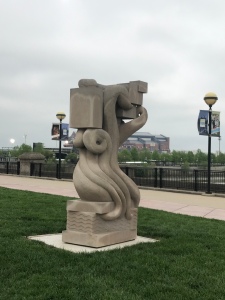 I found out when I got there there was going to be a shakeout run on Friday morning. I’m usually a solo runner, but thought what the heck, a chance to run somewhere rather than the treadmill…I’ll do it! Well, this was one choice I made that I actually second guessed until I decided to take it as a learning experience. It was a small group, and I got to meet a Rob, Twitter friend who I have known through social media for a while, which was super awesome. Not so awesome? It made me feel so slow and inadequate running with this group. I ended up a good ways behind the main group, and had it not been for Rob checking back on me and Shane (another ambassador I had just met that morning) dropping back to run with me I totally would have turned around and ran back on my own. It was kind of spirit crushing, especially when the run says “all are welcome”. I know I take things way to personally, and this was one of those times. Believe it or not I’m tearing up thinking of it now. I did stick with it, however, and did enjoy the opportunity to not run inside.

After the run we made our way over to the expo, which was very well organized and efficient. There were lots of vendors there with samples, coupons and great stuff. The rest of the evening was spent with my hubby enjoying the city. 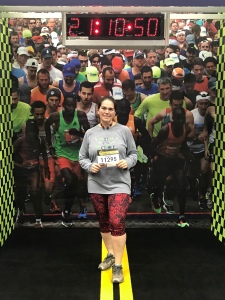 Race day we woke to gray skies and the local weather calling for rain. I wasn’t worried as I tend to run better in not-so-great weather anyway. The starting area was well marked with plenty of portable toilets. For the size of the crowd it was a comfortable atmosphere. After getting into my corral I just focused on relaxing and reminding myself to have fun and to take in the scenery.

The course itself is pretty darn flat, through the city to the Indianapolis Motor Speedway. Without a doubt the coolest part of the race. To get to run where they race the Indy 500? How awesome is that! 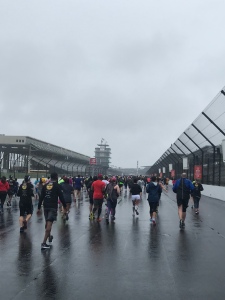 We wound our way back to the city, and this is where I hit another “lesson learned” point. Because I tend to start conservatively, I also tend to run negative splits from about 6 miles on. Well, because of the size of the race this was also the point where I started to get frustrated at the size of the crowd and my inability to pass runners I was gaining on. It’s not anyone’s fault that this was the case. I know how I run, and everyone is focused on their own race, so it was what it was. It did make me wonder, though, if things might be different if I actually trained to race the distance. Would being further up in the crowd work better? Would there be less crowding in a different part of the pack? Like the shakeout run, I tried my best to brush it off and enjoy the race.

After winding through the streets the downtown skyline cane into view and the atmosphere was electric. I love the finish line energy! We raced through crowds of cheering spectators (who were braving the light rain that had started falling as soon as my wave took off!), balloons and checkered flags, and lots of upbeat music. It was awesome! I crossed the finish line with a chip time of 2:23:03, not too bad!

I collected my medal and goodies, and made my way to where the after party was. I have to admit to not sticking around for the party, although it did look like there was lots of things to do and lots of room to spread out. I was just cold and tired and soaked to the bone…not to mention on a timeline to check out of the hotel in time. One thing I will be changing next time I go on a racecation, no more leaving on race day. 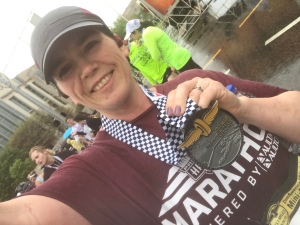 Overall it was an excellent experience, and while there are things I would have changed, I would definitely make the trip back to give the Indy Mini another go!

Now, as for my challenge…well, not my best week. I only did Pilates 3 times and my diet wasn’t the best, but in all honesty enjoying the time with my hubby and being in a new city took priority. I did try to not overindulge, but I did enjoy myself. I was able to keep my sugar intake under control, and with the exception of a monster pastrami and corned beef sandwich, my portion sizes in check as well. No guilt here! I truly enjoyed myself and feel totally ready to get back to doing things 100% now that we’re home 🙂

So there you have it. Week 5 has been an adventure and I loved (and learned a lot from) it all! See you next week at the half way point!